The time had finally come. The reservations were made. Plane tickets printed. Suitcase packed. I dug around in my closet for anything warm, knowing that I would be flying to Chicago in the bitter cold to attend the AWP conference. AWP, or The Association of Writers and Writing Programs, is the biggest creative writing conference in the country. While I hadn't been able to go last year, I made it a point to experience this time - at least while I'm still a grad student (yay, discounts!). Yes, this year's conference was in Chicago - a place I'd never been before, but I'll save my sight-seeing adventures for my next post. This one will focus on the conference itself.

The conference this year as sold-out, so that meant that, if you walked the streets between the Palmer House Hilton and the Chicago Hilton hotels, you'd probably see a lot of people with red tote bags and name tags. 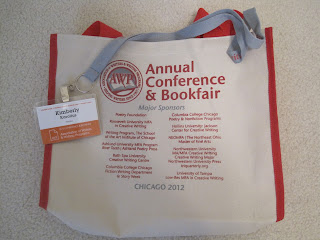 These two key accessories not only got you past security (a lot of hotel workers disguised as friendly, yet stern people), but they were also the best conversation starters. I'm not very social, but I ended up chatting with a bunch of fellow conference goers while waiting for a panel to start or in line for the shuttle. We exchanged a lot of laughs and complained about the weather - though I was so ecstatic about the cold that I only pretended to complain.

I attended around five panels over the course of the two days I was there. I have been to writing conferences before, so the panels, while interesting, weren't terribly new to me. It was refreshing to be sitting in a room with a bunch of eager writers and poets, hands poised to ask the first question at the end of each session. The question and answer periods are always exciting. The last thing I imagine you want to do is read a play-by-play of every panel. So this is, essentially, what I learned from all those panels in a nutshell:


After tackling the panels, I went downstairs to explore the bookfair. If you've ever been to a convention or conference before, you know what a dealer's space is like. Endless rows of booths, all surfaces cluttered with delightful things to buy. Pushing and shoving, wallets ready, plastic bags. For this bookfair, each booth was stacked with books. Literary magazines with their proud editors and staff manned the booths, setting out all kinds of books. As I wandered up and down the rows, I admired the beautiful covers (and at the same time, tried not to drift over and open my wallet. I didn't have room in my suitcase for a lot of books). There were a lot of  ugly covers too - you know, the kinds that look like textbook covers? Brrr. It's interesting to see the aesthetics of each magazine.

The bookfair was separated into four different rooms; the air was stuffy with people and thankfully the hotel provided jugs of water on either end of the rooms. I guzzled down a lot of water. Bookfairs can be pretty intense.


One of the booths I was excited to visit was the Fairy Tale Review. As the title implies, this literary magazine focuses on publishing fairy tale-like stories in their issues. They also have a press that occasionally publishes novels, short story collections, and poetry. When I got to the table, it was crowded with people admiring the  books. There were so many choices, and the books were printed with such high-quality - hard to tell when you're just looking at a photo of the covers online, you know? I picked up the books I had planned to buy: the Grey Issue of FTR and the newest novel, Irlanda.

Kate Bernheimer happened to be at the booth at the time... and I quickly reverted to a five-year-old girl. I can't imagine how I sounded when I spoke with her, but in my mind's eye I was blushing and blabbering about how much I liked her books. I have two of them so far, the anthology of new fairy tales she edited called My Mother She Killed Me, My Father He Ate Me and the children's book she wrote called The Girl in the Castle Inside the Museum with illustrations by Nicoletta Ceccoli. Even as an author and editor, Bernheimer has also been a great fairy tale advocate. If there was anyone at this conference I was excited to meet, it was her.

So you know how I mentioned the artist Nicoletta Ceccoli? Well, it turns out that the novel Irlanda, written by Espido Freire, has a front cover that has one of Ceccoli's artwork on it. Very cool. Ceccoli is one of my favorite artists, so I knew I had to pick up that book - if only for the cover. The book itself, though, was a remarkable read. I'm going to do a mini-review on Irlanda, just to give you an idea of this novel. 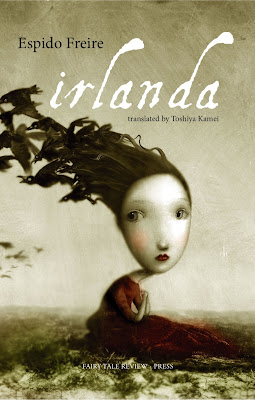 The premise of Irlanda is deceptively simple: after the death of her sister, Sagrario, Natalia is sent away to spent the summer with her two cousins in a decaying country house. She'll help with repairs and get to know the cousins she remembers from childhood - Roberto and the "perfect" Irlanda. The longer she spends in the house, the more it's clear that Natalia has not gotten over her sister's death, along with being haunted by dead animals and braving Irlanda's cold attention. Natalia sees the world through the lens of fairy tales, but it doesn't take long for a sense of unease to settle upon you while you're reading this book. Something's not right.

Here's a small excerpt so you can get a sense of the beauty of the language:


"There was a house in the middle of the field, surrounded by flowers, water, dark trees, and running children, and a grandmother with amethyst necklaces and coral cameos, and a grandfather with a silver cane. A little fairy tale cottage where the girls were dressed in long gowns and added a pearl to their necklaces each year. And they hosted balls where they slid across the marble floor, their dresses rustling, feather fans in their hands.

At least that's what the grownups who told the stories assured us, and that's what my mother said, too, bringing back from oblivion what her grandparents and their grandparents had passed on to her, long after the dresses, feathers, and laughter behind the fans had faded, because none of us, not even my mother nor my aunt, had lived through those splendid days, and you couldn't tell what really happened from what had been made up each time those stories were told."


I think it's safe to compare Irlanda to an Edgar Allen Poe story - there's such beauty and depth to the language, but nothing is as it seems. There's some dark mysteries in this book and when you get to end, you'll probably go back to the beginning to start picking out the puzzle pieces again. If you're up for a spooky, twisted story full of lush imagery, then I completely recommend Irlanda.

To finish off this chain of related events, I'd like to show you a picture I took while exploring the gigantic Macy's in Chicago (something I'm saving for the next post). On one of the many floors, I spied a Ceccoli piece of art on display: 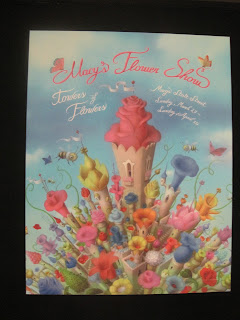 You'll notice that Macy's blotted out one missing piece of this - the girl! Check it out: 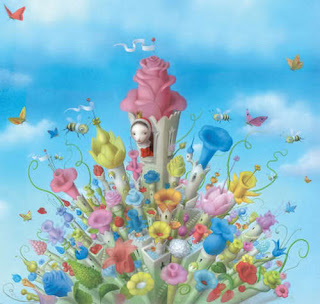 I can't believe they didn't keep the girl in. Still, I had only to look at the insect in the picture to know that this was Ceccoli's work (and, yes, I have seen this one before anyway).

So, in a walnut shell, this was my overall experience at the conference itself. The conference is huge in many respects, so I feel like everyone's experience is probably vastly different. Mine happened to be full of fairy tales and illustrations, haha.
Posted by CloudyKim at 10:14 AM

CloudyKim
Holds an MFA in fiction from the University of South Florida. On her way down the path of becoming a writer with nothing but an embroidered cardigan and a ride on the back of an obliging swallow. 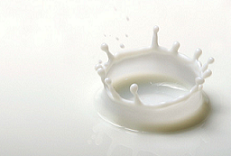 Love Fortunes and Other Disasters

Favorite Quotes of the Moment

MANUFACTURER. I am a maker of dreams, little things that glide into people's hearts and make them glad. Haven't you often wondered where the swallows go to in the autumn? They come to my workshop, and tell me who wants a dream, and what happened to the dreams they took with them in the spring.
- From The Maker of Dreams by Oliphant Down
Bones are the ones that have to make the journey, fight the monster, kneel before whomever is big on kneeling these days. Bones do the work for the heart's grand plans. Bones know what you need. Hearts only want.
- From The Girl Who Fell Beneath Fairyland and Led the Revels There by Catherynne M. Valente

Check out my tumblr page!

Psyche in a Dress
by Francesca Lia Block

The Gormenghast Novels
by Mervyn Peake

The Hunter's Moon
by O.R. Melling

Promote Your Page Too